Aristotelis Potamianos was born in Athens, Greece, where his musical Odyssey started. His first instrument was the classical guitar, but finally he has chosen the double bass. It was like love at first sight!  The very first time that Aristotelis visited the double bass class at the Athens Conservatory, he opened the door and heard a student bowing the lowest string at full power. He was probably just tuning the instrument, but this was a real “Eureka” moment for Aristotelis!

He studied at the Athens Conservatory and  the Hellenikon conservatory of Athens. During his studies a number of significant double bassists came to Athens for masterclasses and coaching of international Youth orchestra’s. Aristotelis meets with and learns from Todor Toshev, Jean-Marc Rollez and Thomas Martin. In 1991 Aristotelis wins his first audition for “The Orchestra of the Colours” of Manos Hatzidakis, an important Greek composer and conductor. In 1992 his education in Athens was completed with his first  Diploma and he also had  played his first free lance projects with Athens State Orchestra and the Athens Radio Symphony.

But after experiencing what is going on in the European music scene, Aristotelis wants to get  more out of his instrument. He follows more masterclasses and gets private lessons in France, England and the Netherlands where he continues his studies at the Rotterdam Conservatory. His European studies were made possible through stipendia that he received from two Greek foundations: the “Apollon Mousagetes Foundation” and the “Aristotelis Onassis Foundation”.

His studies in Rotterdam lead to two degrees, the DM (Bachelor degree, June 1995) and UM (Masters degree, October 1997). In 1996 he performed for the first time as a soloist with the Arnhem Conservatory Orchestra in Respighi’s “Concerto á Cinque”. During his studies in the Netherlands he is playing a number auditions that lead to a broad free lancing network with many Dutch orchestras and ensembles: the Netherlands Philharmonic, the Brabants Orchestra, the Arnhem Philharmonic (Het Gelders Orkest), the Limburgs Symphony and the Radio Symphony. Aristotelis experiences great and highly qualitative productions of symphonic as well as opera repertory and that changes his life. He does more auditions and in June 1998 he becomes the principal of the fabulous double bass group of the Arnhem Philharmonic (Het Gelders Orkest – since June 2020: Phion, Orchestra of Gelderland and Overijssel).

His development continues as he is asked as guest principal, co-principal and tutti (on free lance basis) by many orchestras and ensembles: the Residentie Orchestra, Netherlands Philharmonic,  Philharmonie Zuid-Nederland, North Netherlands orchestra, Amsterdam Sinfonietta,  Rotterdam Philharmonic, Radio Philharmonic en het Royal Concertgebouw Orchestra. He plays in chamber muziek collaborations with Daniel Rowland (2004), Hexagon ensemble and Serafino trio (2014) and in March 2015 in the chamber music series of the Arnhem Philharmonic with the international renowned Mozart Piano Quartet.

Modern music is one of the passions of Aristotelis and he has worked often with the Asko/Schönberg ensemble. He is also member of the avant-garde formation “Hungry Gods” that is formed by and plays exclusively music composed by Florian Magnus Maier. He has also been active in the genre of music-theater and played in productions of “Music-theater Group Amsterdam”, “Oostpool”, “Oorkaan” and “De Plaats”.

Aristotelis is initiator and member of the chamber music formation “Ensemble REI” and the double bass ensemble “ContraBasta” . Since September 2018 he is lecturer at the ArtEZ University of the Arts (Zwolle – Arnhem – Enschede).

Aristotelis plays on a fine Italian double bass made by Adolfa Berretta in Turin in 1872. This exceptionally beautiful instrument is given to him on loan by the foundation “Mecenaat van Het Gelders Orkest” (Mecenas of the Arnhem Philharmonic). 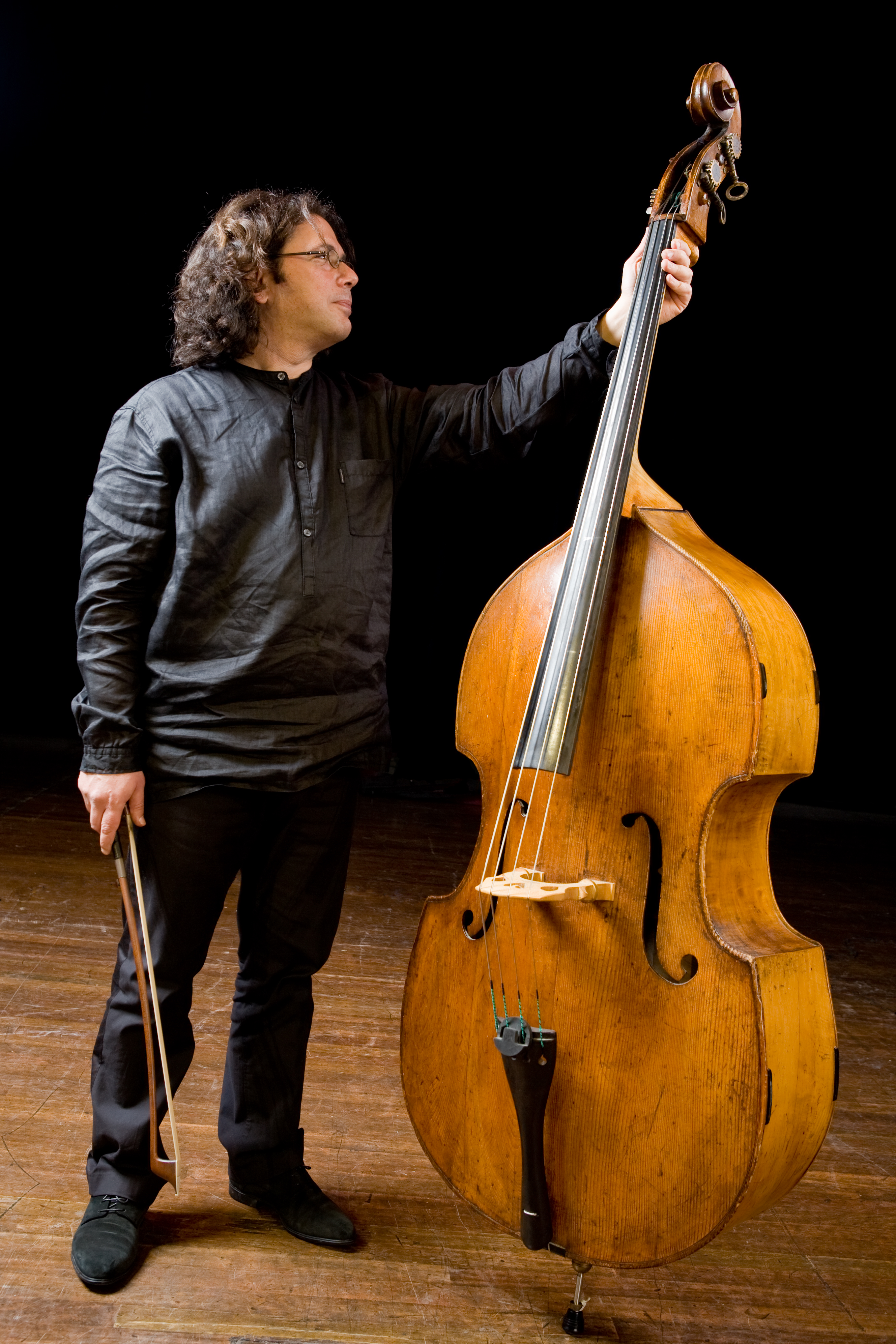